With the previous blog I left off after the first Dr. visit when the pregnancy was confirmed. I had a second appointment scheduled with the doctor in Hiroshima but that is about an hour away by public transit and seemed like a little further way than I really wanted to be from the place I was going to have to go regularly for checkup.

I spoke with the insurance people so see if I could get a doctor closer to where I actually live.  They assured me that there were no doctors that spoke English near me.  Fortunately, there is another resource for us, I think it's called International S.O.S. and after contacting them, they said there was a doctor in Saijo that spoke some English.  The doctor's office is a block and a half from my apartment.  Done!

The International S.O.S. people told us they are open on weekends and take walk-ins so we didn't need an appointment.  On Sunday morning we went down to the clinic. You take your shoes off as soon as you walk in the door and put on the slippers provided (this was made obvious by all the shoes in the entryway of the clinic and the slippers). Next was the extensive sign up process with the clinic (every new doctor's office you go to you get a different patient number and a new card).  First we had to signup at the main desk down stairs (which is a general health clinic), then we got the clinic card and went upstairs to the OBGYN clinic.  Very little of the paper work was English and none of the nurses speak any English.  By hand gestures and our limited Japanese we figured out where to go and what to do.

At this point I was pretty much living in a state of perpetual queasiness and as the wait went on and on, I felt worse and worse.  After an hour we figured out the system for calling patience and realized that there was still a really long wait until they called us.  I think it was around 2 hours before it was our turn. At this point I was feeling very green.  We briefly met with the doctor and she checked me and the baby out and declared everything good.  She then said we needed to register the baby with the city office and that we needed to come back with the baby books and coupons in a week.  We were not entirely sure what she was talking about but she showed us a booklet someone else had and then handed me a paper to take to the city office and scheduled us an appointment for the following week.  She definitely made the point that we should schedule appointments whenever possible as the walk-in wait was terrible.

The next week I went down to the City Hall and asked where I had to go to register the pregnancy (basically I showed someone the paper and asked "where?" in Japanese and was pointed in the right direction).  I was handed a huge packet of what I can only assume is very useful information but of course, I can't read any of it because it is all in Japanese.

Still, there were some useful bits.  I have are 2 baby books (one in English and one in Japanese) in which the doctor records all of my checkups, test results, the birth, vaccinations and goes on up through the first 6 years of the baby's life.

The other bit of useful stuff is a coupon book.  This has coupons for all of the ultrasounds, blood tests, urine tests, birth, hospital stays, pediatrician visits, dentist visits, optometrist visits, you name it, for the first 6 years of the baby's life.  The coupons seem to cover about half of the costs.  I was told that the coupons were like money.  If I loose them, they are gone and can not be replaced.

I was also given a little badge to put on my purse that pretty much tells the world I'm pregnant.  This is useful for public transit.  There are special seats on the bus, street cars and train for the elderly, people with injuries that require them to use crutches, women carrying infants and pregnant women.  This means I can always get a seat.  This is really nice and has come in handy when I'm queasy.  I don't always sit in the special section but it's nice to have the option. 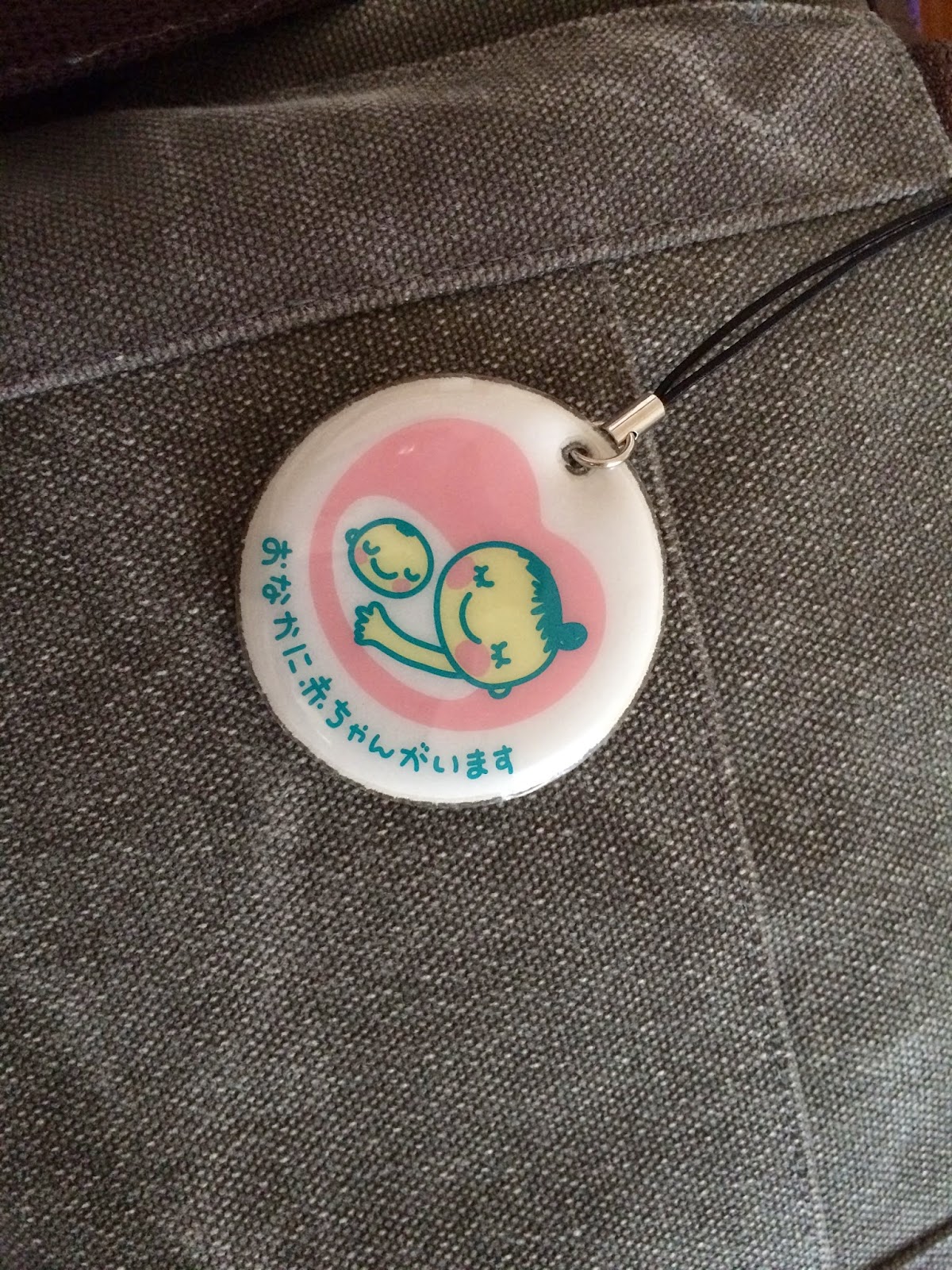 This is my purse tag

This still leaves about an inch of papers in the packet that I still have no idea what they are supposed to do or if they have any use at all.  The City Office tried very hard to be helpful but there was only one lady who spoke any English but she did not speak much.
Posted by skysworldadventures at 4:00 PM