Day two started out clear but bitter cold.  It was below freezing and the wind was very strong.  The "feels like" temperature had a high of 19'.  We kept the day a little shorter than we would have in better weather but still saw a ton of things.

We started off by checking out the Shinkyo bridge.  It is one of Japan's "three finest bridges".  Japan's ranking of tourist attractions cracks me up.  The bridge marks the entrance to Nikko's shrines and temples and is rather pretty. 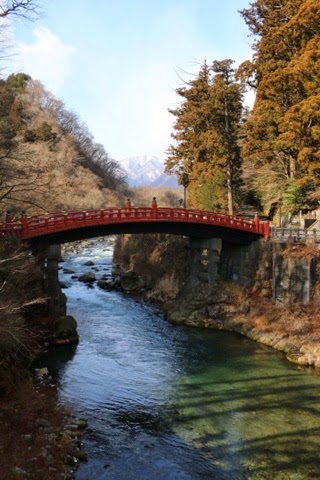 Next we went to Toshogu which claims to be "Japan's most lavishly decorated shrine".  It is the mausoleum of the founder of the Tokugawa shogunate.  This was a surprisingly large complex of crazy ornate buildings. 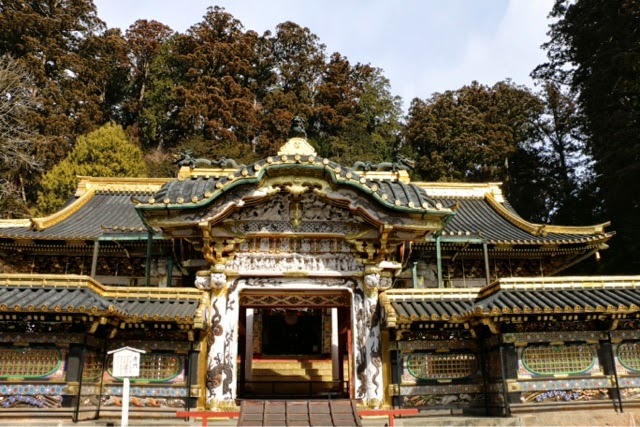 Here is the the entrance to the shrine. 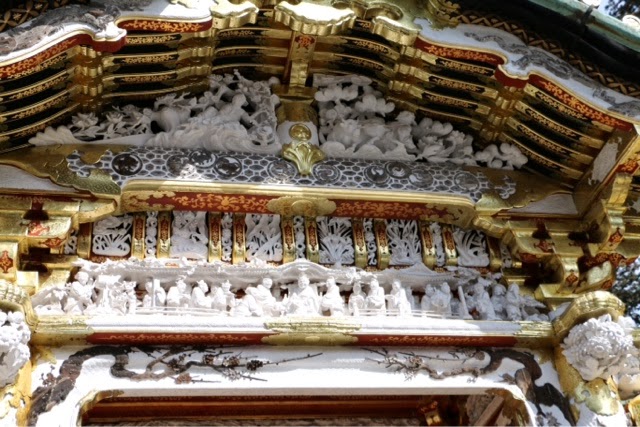 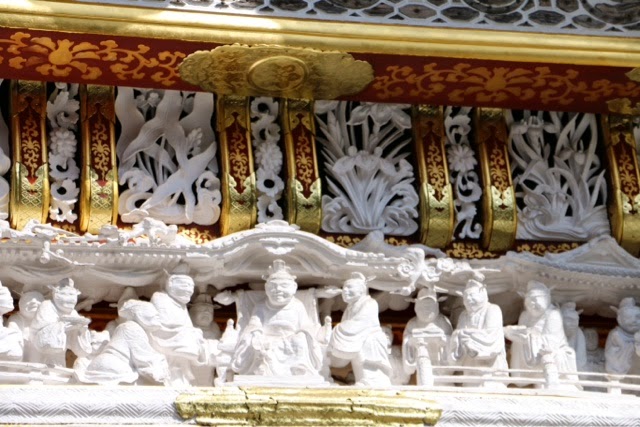 There are some carvings in this shrine that Japanese people just love.  There are hundreds of thousands of carvings but there are a couple that people will wait in line for hours to see durring high season to take pictures of.  Fortunately for Jeff and I there was almost no one at the shrine due to it being early, on a week day, off season with crappy weather. 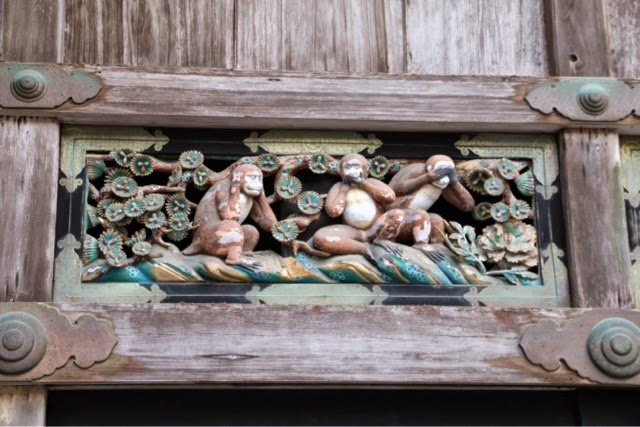 The "hear no evil, speak no evil, see no evil monkeys" 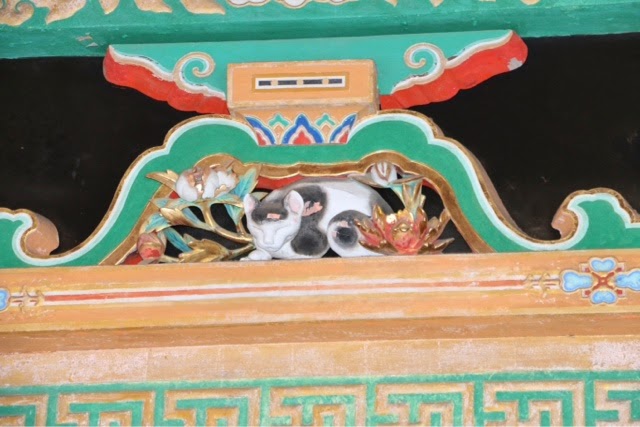 The sleeping cat.  Not sure what the appeal was.  There were peacocks and dragons and far more interesting carvings in my opinion, but I was a good tourist and took some pictures of the things I was supposed to, lol! 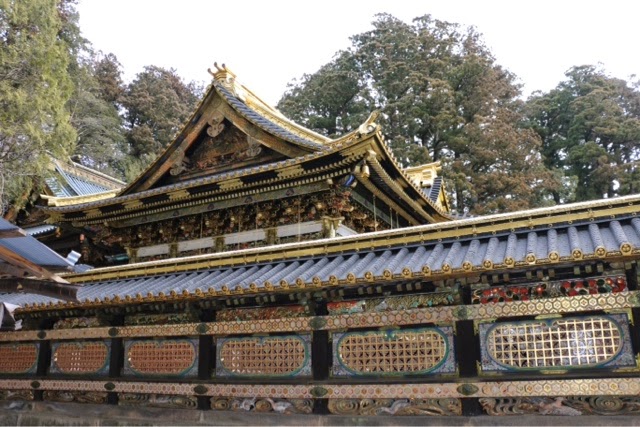 Crazy ornate outside of the inner shrine.  The inside was insane in its upkeep and the level of detail of the painting and carving but was a "no photos allowed" area so unfortunately i cannot share any.

Next we went to the temple of the crying dragon which had a huge dragon painted on the ceiling and had amazing accustics.  The had some wooden rods the clapped together and the while building rang like a bell.  The sound just reverberated like crazy.  Again, it was a no picture zone.

We took a lunch break to warm up.  My silly husband ordered a cold noodle dish (zoru soba) for some reason?  Seemed like hot food weather to me.

Next we took a walk out to the Jizo statues.  They are said to protect unborn children and children that are miscarried, in the afterlife.  The bibs they are wearing symbolize them providing food for the children and the hats keep them warm in winter.  They also protect travelers.  There is a long line of them that has been partly destroyed by time and nature but there are roughly 72 remaining.  The walk to get to them was along a lovely river. 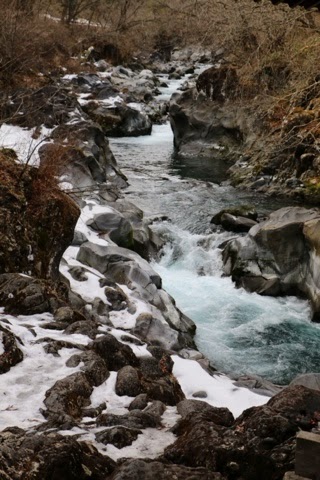 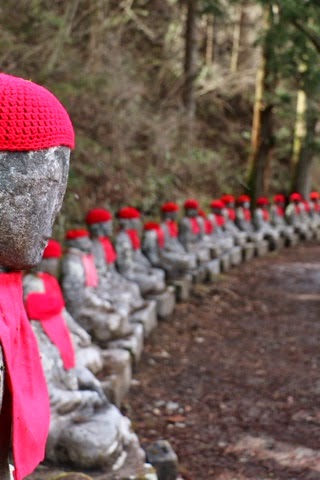 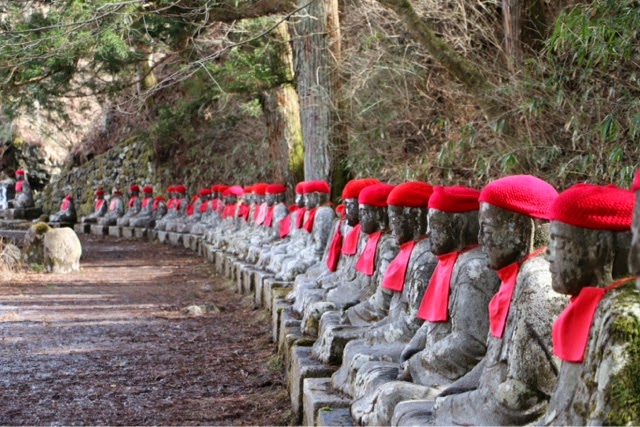 Between the walk and the cold I was pretty tired.  We went back to the hotel to warm up and took a little break.  We ventured out later and explored the town a little bit and enjoyed the small shops and figured out where we wanted to do to dinner.  It was a lovely but cold day.

Posted by skysworldadventures at 4:59 AM