International travel with a 2 month old

I think I have already covered the importance of making sure you have a passport?  If you somehow missed that, go back two blogs.

You need many diapers.  More than will fit in a diaper bag.  Have a carry on bag with extra diapers, changes of clothes and anything you NEED when you get where you are going for the baby.  Fortunately we had everything we needed and packed a ton of diapers.  Wren hates to be wet.

The first flight was a short one, just a quick hop from Hiroshima to Seoul Korea.  Customs was quick and easy.  I was worried about my small cooler full of milk for Wren but they had no problems with it.  The next minor hurdle was the car seat.  We ordered the car seat from Germany (even though it's sold in the US, the shipping was cheaper).  For some reason, even though it has the certification to make it airline safe, it doesn't have the right sticker on it so everyone gets all weird about it.  The stewardesses took our car seat and insisted on trying to install it themselves and had us board just carrying the baby later.  They said it wouldn't work with their seats be cause they were trying to install it backwards.  Eventually they let Jeff install it and all was good.

Wren was great the whole flight.  She was a little hungry as we were boarding which was perfect.  I kept giving her small sips of milk from the bottle to keep her from totally loosing it as we were taxiing and as soon as we took off I let her drink as much as she wanted.  The swallowing helped her sinuses to equalize from the pressure change and so she had no problems at all.  I did a quick diaper change on the seat between Jeff and I and that worked well.  I woke her up right before landing and she polished off another bottle on the way down.  I don't think she cried at all the whole flight which was a huge success.

We had a long layover in Seoul.  The first order of business was for us to get our tickets fixes.  None of us were seated together which seemed like it would be a bit of a problem.  The only way to get the tickets fixed was to go to the boarding gate.  We went there but the previous flight was a different airline.  They couldn't help us but the 4 Korean ladies who were at the gate decided Wrens big blue eyes were the prettiest they've ever seen.  Jeff and I joke that now that we are home she is just another white baby while she was in Asia she was adored by everyone, lol!  After a long time the right people showed up at the gate and we got our tickets fixed.

There was a little less confusion with the car seat but they still frowned at it.  We did the same routine for take off and all was good.  We made it until about half way through the 10-ish hour flight before things took a turn for the worse.  Right when everyone is sleeping, the lights are off and the plane is quiet, Wren woke up and was angry.  She used to get in to a state that we called fuss lock.  She is hungry so she is crying but you can't feed her until she calms down because she wont eat.  But she wont calm down because she is hungry.  You see where this is going?  So, Wren was screaming for all she was worth while the whole plane was trying to sleep.  I couldn't get her to stop.  I was so tired at this point because I hadn't slept more than a couple hours in the last 4 days that I was really having a hard time functioning. I was just about ready to start crying too when Jeff took Wren and got her to calm down.  It seemed like she was crying for ever, but it was only about 20 minutes.  Most people seemed to have headphones or ear plugs but I still felt awful.

The rest of the flight was without incident and the final leg, San Francisco to Boise was uneventful.  The flight was delayed about an hour and a half but that was the only point of interest.  Wren was pretty quiet.  I was a total sleep deprived Zombie at this point.  In Boise we collected our luggage but the box that had the bassinet was missing.  I just wanted to go home so bad and shower and sleep.  Jeff talked to the lost luggage guy and found our bag in San Francisco still.  It would be on the next flight to Boise.  So we took a cab and went home.


I'm a little fuzzy on the details but I found towels in a box that we had left in the house and so we all managed to get clean.  There was also a quick trip to the grocery store to get something for dinner and some things to survive the next couple of days like plastic cups so we could drink water and things like that.

Since we didn't have a the bassinett yet, I made up a drawer as a baby bed.  It worked for one night.  I think she's too big for that drawer now.  Makes me realize how behind with this I am, oops! 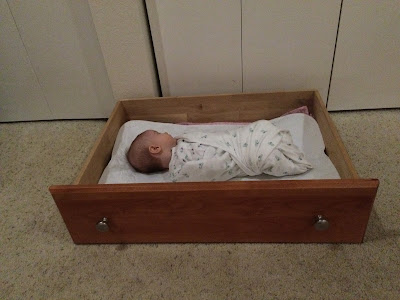 Well, that gets us back to Boise.  I only have a couple more stories to tell then it's time to retire this blog.  I'm a bit sad it's coming to an end but I am no longer an expat in Japan!
Posted by skysworldadventures at 3:00 PM