This weekend Jeff and I went to a Sumo Match in Hiroshima.  It was far more interesting than I expected.

The first little interesting bit happened right when we walked in the door, we were handed a little bag and instructed to take our shoes off.  The bags were not for western size shoes.  Jeff and I both have relatively small feet but I was wearing knee high boots so they didn't exactly fit in the bag.

We were shown our seat by a very helpful usher.  I was extremely happy that we opted for the cheap seats.  They were on the upper level and were actually seats.  The floor seats were literally on the floor.  There was a mat or tarp on the floor that was marked off with different seat numbers and people in those seats sat or knelt on the floor.  Many people had cushions and they sold them at the arena as well.  I was very happy to have a normal seat with a back and my feet on the floor.  They were very narrow seats but my knees and back are not used to sitting on the floor.  One other interesting thing about the arena was that they had no air conditioning on or fans on.  It is October, but it still got amazingly hot and stuffy by the end of the match.  Many people were fanning themselves (me included).
When we first got settled there was a comedic relief duo that were mock wrestling.  They were both extremely large men and surprisingly agile.  They dropped to the ground and rolled, picked each other up and and one point the both dropped in to full middle splits.  We really enjoyed them and were impressed by their athleticism.

Next there was a ceremony where the wrestlers took the stage and each sang a little song.  It is my understanding that it was an introductory song where they told a little about themselves and did a little smack talk.

After everyone had a chance to tell their story they filed out.  They came back in 2 at a time from opposite sides of the arena and approached the platform where the wrestling took place.  The platform was filled with sand and a rope in a circle marked the wrestling area.  The opponents would bow to the stage and wait their turn if another match was still in progress by sitting on the floor in front of the stage.  When it was their turn to wrestle the announcer would sing their names and they would mount the stage and go to their respective corners and take a sip of water.  Then they usually would drop to a low squat then tip over with all their weight on one leg and put their un-weighted leg high in to the air and then repeat on the other side.  Then would then grab a handful of salt and toss it in to the ring (to purify it).  Next the wrestlers would face each other, clap their hands and put their arms out to show they are unarmed.  Then would then repeat the squat leg up ritual in front of each other.  then would then squat down and glare at each other for a little bit before standing up and going back to their corners.  There was usually a little ritual looking thing that each one would do (similar to any pro athlete before a game) then they'd grab and toss more salt then go back in the ring.  They would squat low right in front of each other.  Sometimes they would start wrestling and sometimes (something Jeff and I couldn't quite figure out) one of them would decide it wasn't time yet and they'd get more salt, toss it and then squat in front of each other again.  This could happen 2 or three times before the match actually started.

There are basically two ways to win at sumo, you either get your opponent to step out of the rope circle (on the rope is ok) or you knock your opponent over.  The day was set up so that the less experienced and skilled wrestlers went first and they finished with the more known and better wrestlers.  The techniques varied but it was obvious even to our untrained eyes that the later wrestlers were much better.  The match always started the same.  The wrestlers would launch from their squat at each other with an impressive explosive force.  There was no countdown or obvious signal to start.  The wrestlers would just watch their opponent and decide to go or not.  Some waited several seconds and others went right away.

Techniques seemed to include:  straight up pushing the other guy backwards out of the ring, picking the guy up by the sides of the loin cloth and out (this was often done with a twist from a guy with his back to the outside of the ring), repeatedly slamming in to your opponent to push him out, there was one choke hold where a guy was pushed out by his neck, and several slappers which was really odd looking when done by large adult men.  There were several leg sweeps, one guy simply side stepped and pushed his charging opponent past him and out of the ring.  The matches were fast and lasted from 30 seconds to maybe 3 minutes of actually wrestling.

Here is an action sequence of two guys smashing in to each other from the initial squat, this was at 7 frames a second, so less than a half a second passed. 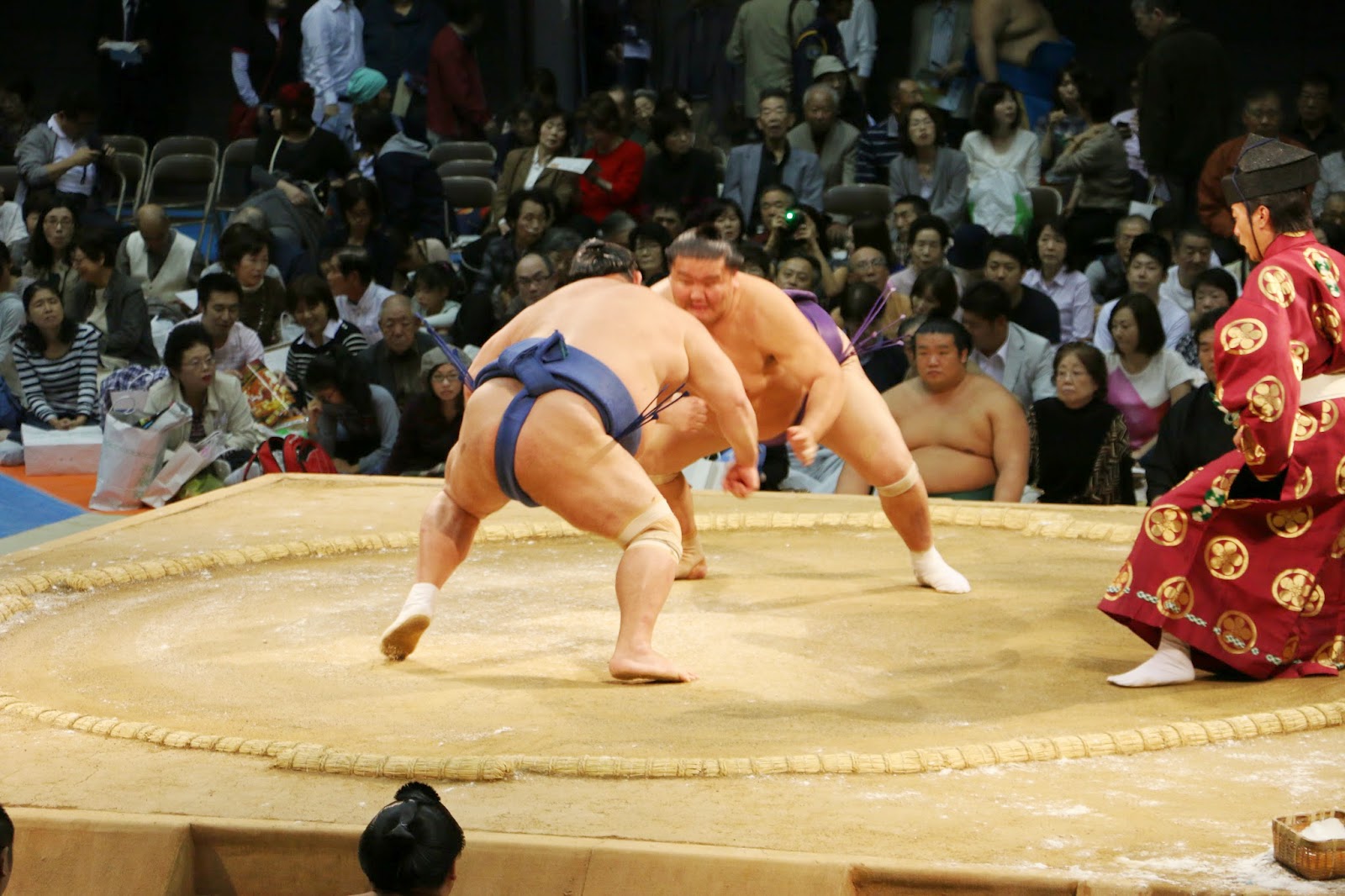 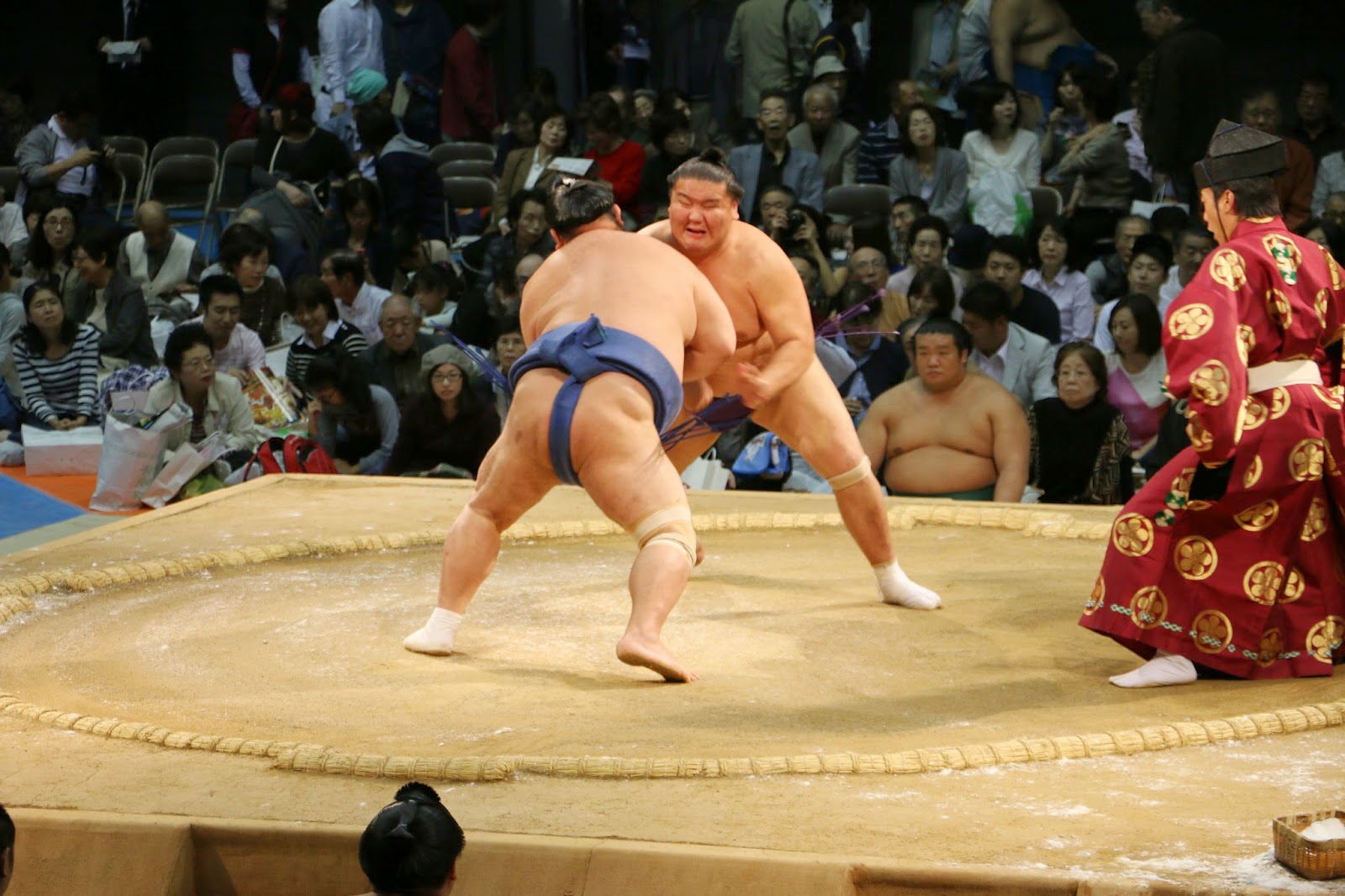 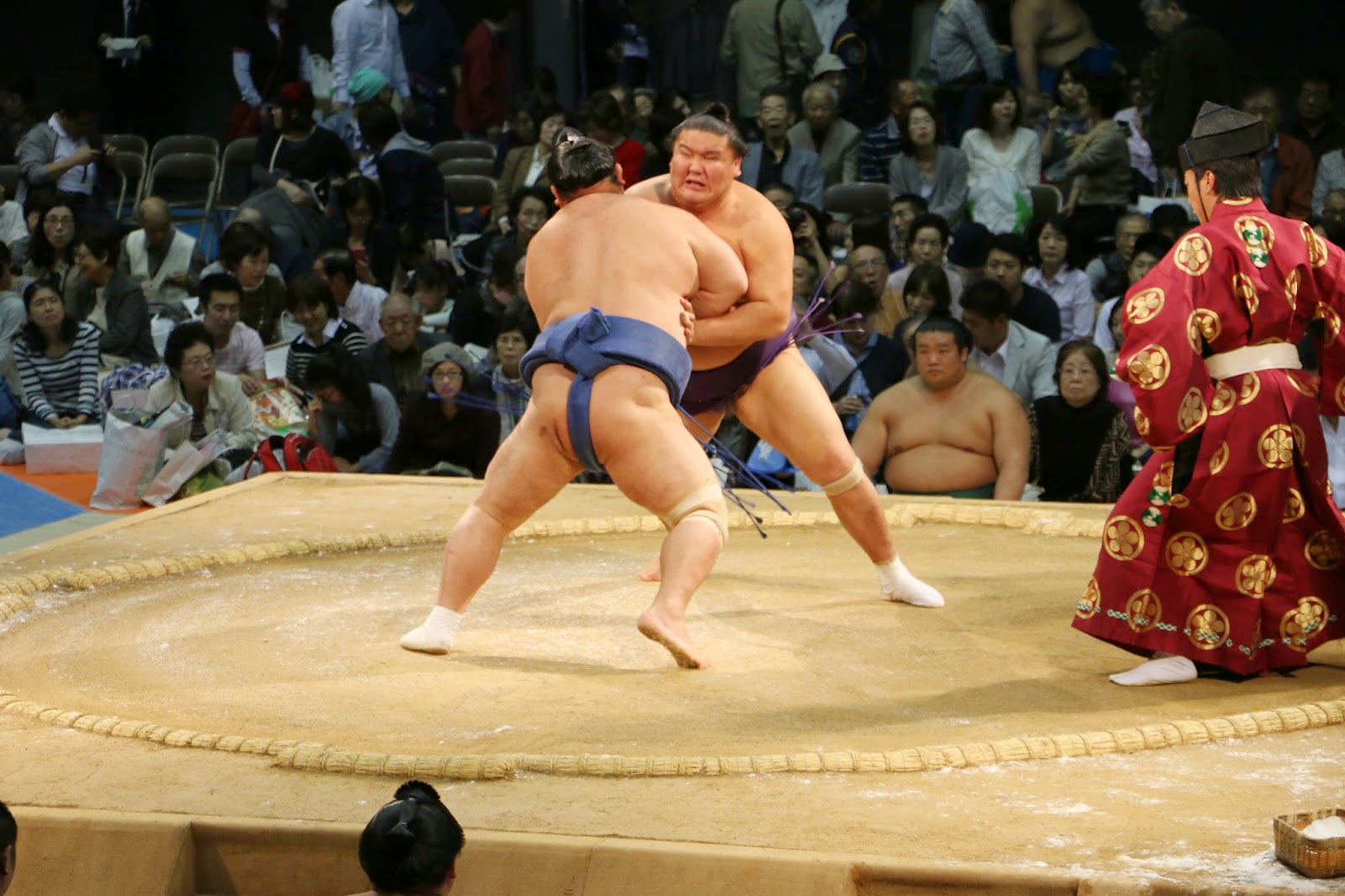 Here are a couple other action shots that I took.
After the matches each wrestler would exit the stage and bow to the stage.  Victors would usually watch the next match and the losers would usually politely exit.  Everything was very polite and dignified, typical Japanese.

Like wrestling in the US there is a belt for the champion but it is quite a bit different looking and there was a bit of presentation that went with it.  There was a victory dance by the champion before he got the belt with lots of demonstration on his ability to squat low and do the standing side split thing.  Then a bunch of guys came out with the belt and tied it around his waist and made a very elaborate knot at the back.
Again, I'm not sure why this guy got the belt and no-one else but it was interesting.

It was a very interesting experience and glad we went.  We followed with dinner at our favorite restaurant in Hiroshima, it was a good day.
Posted by skysworldadventures at 4:10 AM