A little Japanese culture with my teacher

Once a week I have a 2 hour Japanese lesson.  My teacher, Ito-san is great.  Her English is limited but better than my Japanese.  We are enjoying learning about each other and each others culture.  I think she is learning more English than I'm learning Japanese but I'm okay with that.  She is becoming not just a teacher but a friend.

In December, we went to a Ikebana class together which is a special and specific type of Japanese flower arranging.  Japanese also have more westernized flower arrangements in which flower are arranged in a way that is aesthetically pleasing.  Ikebana is a bit more complicated.  The number of flowers used has meaning, the way in which the flowers are used has meaning, the types of flowers and colors all have meaning.  In high school, I worked in a flower shop so I found this all extremely interesting.

I rode my bike to the class.  The room reserved was all tatami floors (flooring made from rice plant stalks, it is very smooth and springy and very pretty) so we took our shoes off at the door.  The floor where we would be doing the arrangements was covered in blue tarps to protect the flooring.  The tables were all low to the floor and we knelt for the class.  There were about 10 people in the class.

First, the teacher handed out pamphlets that had pictures of some flower arrangements that were done by a master of the art.  She talked through why they were special and the significance of the pieces.  With my limited Japanese and Ito-san's limited ability to explain the subtle nuances to me, much of this was over my head.  I did get a better understanding for what Ikebana is about.

We then got our vases and flowers and we each had a table to ourselves.  The teacher explained the piece and drew some stuff on the board.  I got the general idea and then we all started on our arrangements.  It was a lot of fun to get to play with flowers, it's been a while since I've done anything so thought out and not just trying to make the flowers from a grocery store bouquet look okay. 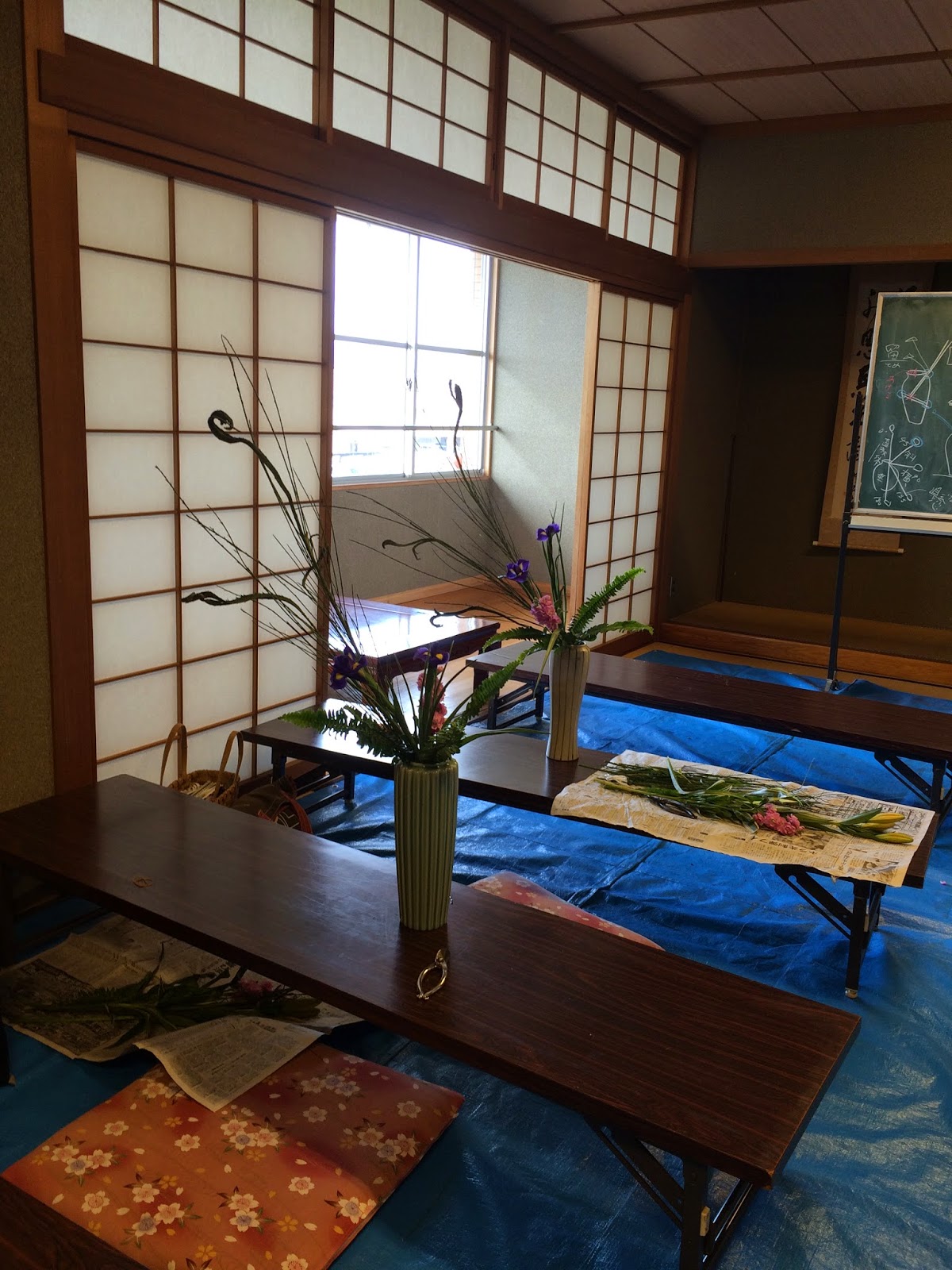 Once everyone was finished the teacher went around the room and talked about the good and areas for improvement in everyone's arrangement.  Then with crazy efficiency, everyone pulled their flowers out of their vases (the vases belonged to the center and were not to be taken home, but the flowers could be taken home) wrapped up the flowers in news paper, cleaned up the tables, folded up tarps, vacuumed, moved room divider screens and set up snacks and tea.  I had brought cookies and everyone had brought something so we all had a little snack and chatted and drank tea.  It was really fun.  People were curious about what I was doing in Japan and what I thought of the class.  I tried to answer what I could in Japanese and the rest poor Ito-san was left to try and translate.

After snacks as we were leaving the building they all stared at me in shock and horror when they realized that I was going to ride my bike home in the cold while pregnant.  There was a small hill between me and home and they all thought that this was such a strange thing that I could do this.  I have seen so many Japanese women walk bikes up hills that I guess they never considered that I could actually pedal up it.  They all stood and watched as I put my flowers in my bike basket and waved as I rode away. 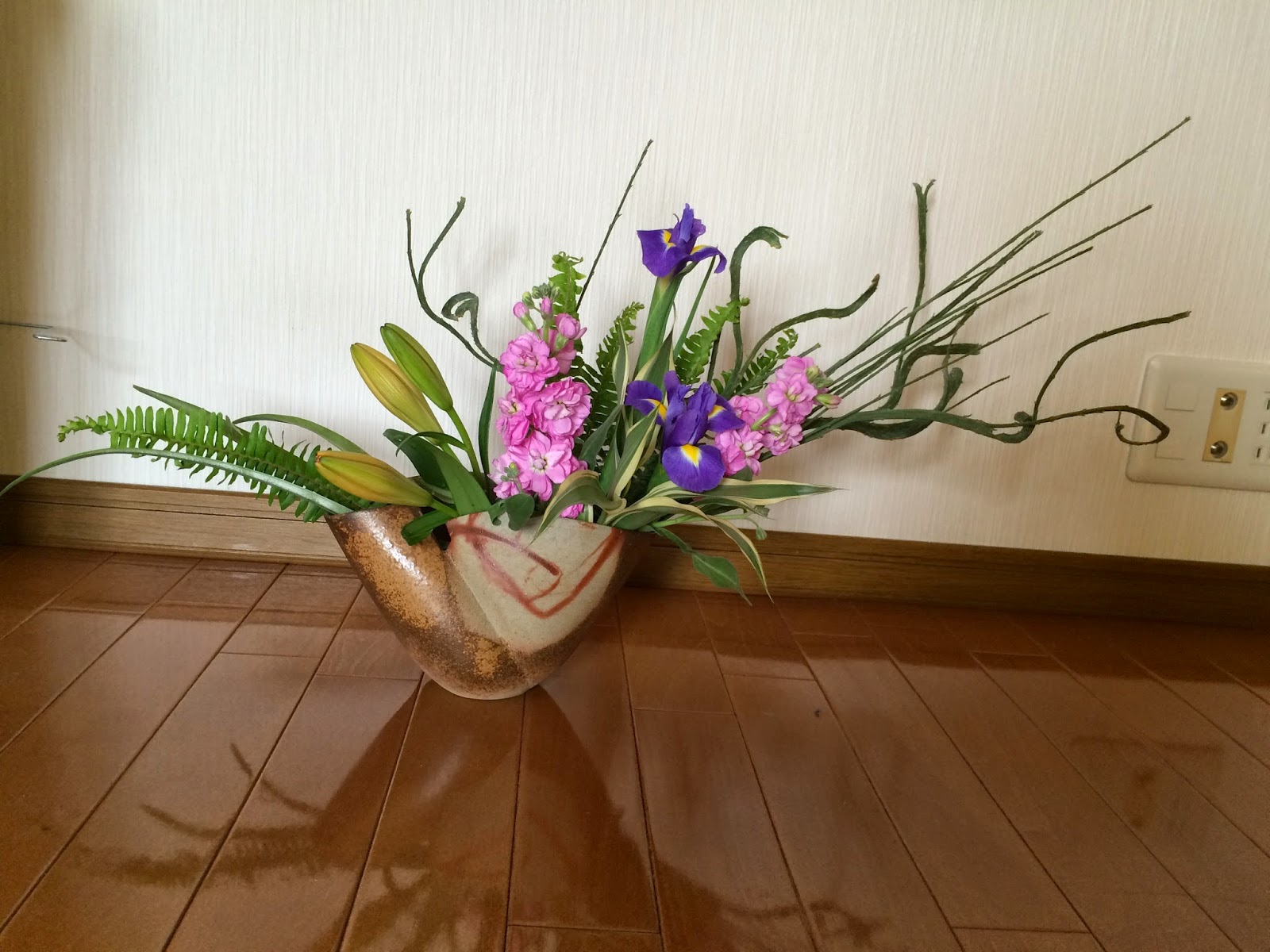 When I got home I tried to reconstruct my arrangement in a vase that I bought in Japan.  I have no idea what the teacher would say about it, but I liked it!

The last lesson I had in December, Ito-san wanted to cook something Japanese with me.  She brought all of the supplies to make toki-yaki.  There is a small cast iron griddle with semi circular indentations about a inch and a half in diameter.  First you make a batter that is similar to an unsweetened pancake batter and fill up the tray with batter, then in each little cup you drop in a small piece of toki (octopus) and then cover the whole thing with chopped green onions, cabbage and some dried sea weed and dried fish flakes.
Once the batter starts to set, you cut a grid between the cups to separate them and start to roll the contents of each cup around a little.  After a couple of rounds of rolling the cup contents you wind up with little spheres that are crispy and browned on the outside and hot and slightly softer on the inside.  Once the toki-yaki are done, you serve them with the same sauce that is used for okinomiyaki (probably equivalent to Japanese BBQ sauce).  I thought they were very tastey and it was to learn to cook something very Japanese.


Posted by skysworldadventures at 9:27 PM