Friday was a busy day.  I have my Japanese lesson every Friday and I'm now also taking tea ceremony class every 2nd and 4th Friday after my Japanese lesson.  No, I don't have to wear a kimono every time, the other ladies do not wear kimonos it's one of those I can if I want to things but will only do occasionally cause it isn't all that comfortable and takes forever.

After tea ceremony class it was back to the doctor for my monthly baby check.  She is up to 80% girl.  Jeff and I have decided to just call it a girl at this point if any one asks.  The doctor was really looking for anything that dangled and it sure looks like a girl to me!  I made my doctor happier this month by only gaining a little over 1 kg which is preferred in Japan.  I personally don't really care but it's funny to me.

After the doctor Jeff and I got cleaned up for a nice dinner out for the anniversary of our first date 17 years ago.  Jeff took a couple of bump pictures so here you go... 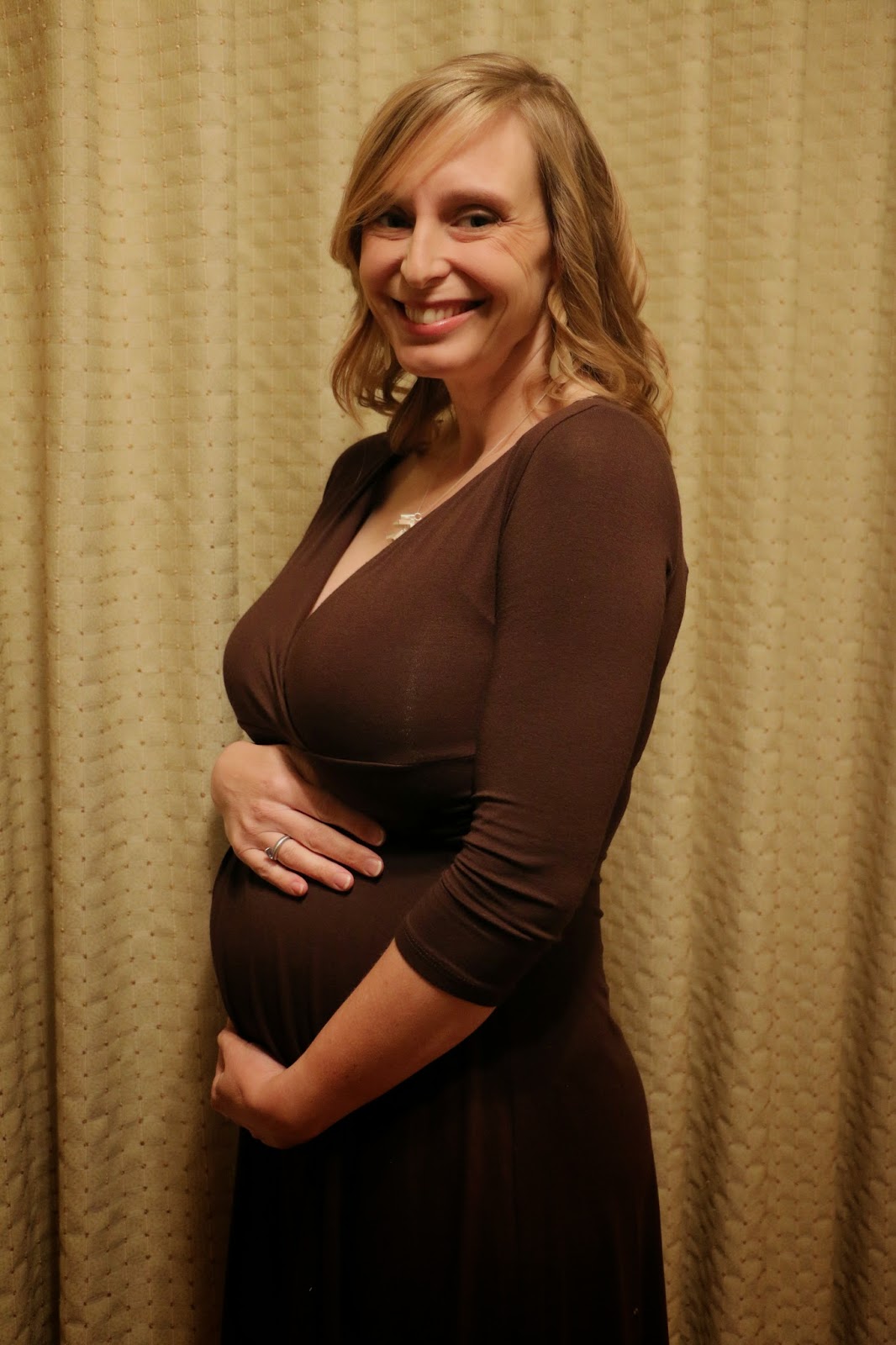 Sunday was very interesting for us.  Higashihiroshima city hall has free classes for new parents.  There is a Poppa and Momma class and a just Momma class.  Sunday was the Poppa/Momma class.  And "Poppa" seems to be used in Japanese for dad.  I'm taking the Momma classes in March and there are 3 of them as opposed to the just one day for the guys.

Jeff and I are getting much better at Japanese but not enough to handle this type of thing so I arranged to have an interpreter.  We were fortunate to get the same lady that had helped us previously.  I really like her and she does a great job.

There is a small booklet that they give us (all in Japanese, of course) that is Finding Nemo themed.  I'm guessing they were playing up the parental role of the dad in that movie.  The first part of the class is the poppas have to learn how to give the baby a bath.  There were little tubs set up and towels and clothes laid out and each station had a weighted baby doll.  The teacher went through a very precise set of instructions and demonstrated the procedure.  The instructions included exact room and water temperatures for bathing and a 8 step exact pattern process for wiping the baby's faces.  The Poppas then were set loose to try and wash their babies.  Jeff was super cute and extremely careful.  I thought it was interesting that they emphasized that bathing the baby is something that fathers do, not mothers.

Next we went to a different room where each of the guys drew a slip of paper that had a task on it.  They guys went up, two at a time and put on a weighted pregnancy vest thing.  It was shaped like a pregnant belly and breasts and weighed 13kg (roughly 26 lbs).  They then had to perform the task that was something their wives most likely did routinely.  Jeff had to leave the room, put on his shoes and take a walk down the hall.  I think he now understands much better why I'm wearing my slip-on shoes most days and not my knee high boots.  Other guys had to vacuum, pick up object scattered on the floor, try and cut their toenails with the belly in the way, make a futon bed, and lie down like they were sleeping.  I think the whole point was to have the guys empathize with their wives a little bit and understand why it takes a little longer for us to do things.  I think it worked cause I got a really nice back rub last night!

The third section was a video in which they showed how babies react to their fathers and really stressed the importance of fathers spending time with their babies.  I think this is an attempt to make a cultural change in Japan.  The old way of thinking is that good fathers are just providers for the family but are really not all that involved with the kids.  Jeff and I both felt that a big part of the class was just trying to get the men more involved.

The whole thing was very interesting and I like the idea of Jeff being the bath master.
Posted by skysworldadventures at 7:00 PM