I'm now 3 days past my due date.  The house is clean.  The freezer is stocked.  Laundry is done.  I baked cookies.  I'm anxious and running out of things to do to keep busy so I started a research project on something I was curious about.  I apologize if my facts are not 100% accurate but this is my understanding of things through observation and Internet research with a pregnant brain.

Through out my stay in Japan, there have been occasional cars driving around with megaphones mounted to the roof of the vehicle blasting a stream of loud Japanese.  Almost all of them have been women's voices all high pitched and nasally sounding. I have learned that these are political campaign vehicles from my Japanese teacher.  The campaign period lasts for 12 days.  About 2 months ago there was an election and there was a ton of these vehicles. We live off of a bigger street so we would get a van going by every 15-20 minutes starting around 8 AM and going until about 8 PM.  It is very safe to say that this got old.  Even with the windows closed the noise from the vehicles was very intrusive and got annoying.  The loud Japanese that is blasting out of the vehicle is the candidates names and greetings to people out walking around.  What is being said is often scripted and the women speaking are called "Lady Birds" since they are constantly chirping.  People in the vehicle wear white gloves and will wave at you if you are walking down the street.  Apparently, the candidates are not allowed to give speeches when the vehicles are moving.  Speeches are saved for when the vehicles are parked which is why they are often seen sitting outside of train stations or other busy areas such as shopping malls.  Each politician is allowed to have only one vehicle campaigning for them and only 4 people (including the driver) is allowed in the vehicle.

It seems that recently there has been some backlash against the campaign vehicles as noise pollution and there has been some efforts to restrict the volume that is allowed.  This doesn't seem to be getting much traction as most Japanese are so used to the constant barrage of noise that it does not bother them all that much.

Several places around town are boards that have pictures of each of the people running for office. 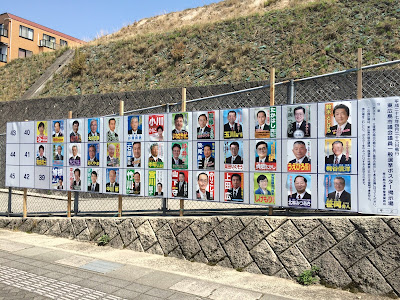 I feel a little bit conflicted about the number of rules an regulations around the political campaigns in Japan.  On one hand it seems very limiting but on the other hand I can help but wonder how different American politics would look if each candidate had a cap on the amount of money that could be spent on their campaigns.  What if politicians voted for what they believed in without influence of which lobbyists would contribute to their re-elections?
Posted by skysworldadventures at 9:06 PM