A few weeks ago I decided that I wanted to go some place in Japan that we could play in the water before it got too cold.  I started doing a little research on places that were not super far away from Hiroshima and I found the Oki Islands.  They are a small grouping of islands that are north of us.  It turns out that they are a really odd place for foreigners to go and it is usually just Japanese tourists that go there and even not many Japanese go there.  Its sort of an odd spot.  I love finding odd places so this didn't deter me at all.

We started on Saturday morning with a couple hours driving to the ferry port.  We then hopped on an absolutely enormous ferry.  One thing that was very interesting was the lack of seats.  Instead there were large areas that were raised about a step up and covered with tatami mats.  Tatami is the traditional flooring for Japanese.  The mats are usually made from rice straw and are a very nice texture.  Everyone took off their shoes before getting on the mats and sat or laid on them.  Jeff and I opted to sit outside since I thought the fresh air would be good since I tend to have motion sickness problems.  The crossing wasn't too bad.  It was a beautiful day and the water wasn't too rough.


Once we found our hotel (a short bus ride from the dock) we relaxed a little and then found our sea kayak guide.  We had signed up for sunset sea kayaking.  A short drive to the put in and off we went.  It was absolutely beautiful.  The coast was cliffs and craggy rocks.

We kayaked through a couple caves which was spooky and a little nerve racking.  We actually just pushed ourselves along using the walls of the cave, not paddles.  The surges from the waves made this tricky as the water level fell and rose several feet.

We got out of the boats for a bit to take pictures of a fantastic rock arch and some craggy rocks.  It was ridiculously pretty.  We only had Battle-Cam (our old, fairly beat up camera that is literally held together with tape that we use when the probability of getting wet or dropped is high) but it still did a great job with the pictures.  The hard thing with Battle-Cam is it only has a digital screen, no view finder, so in the sun on days like this we are taking pictures half blind and hoping they turn out.  This just goes to show how stupidly gorgeous it really was. 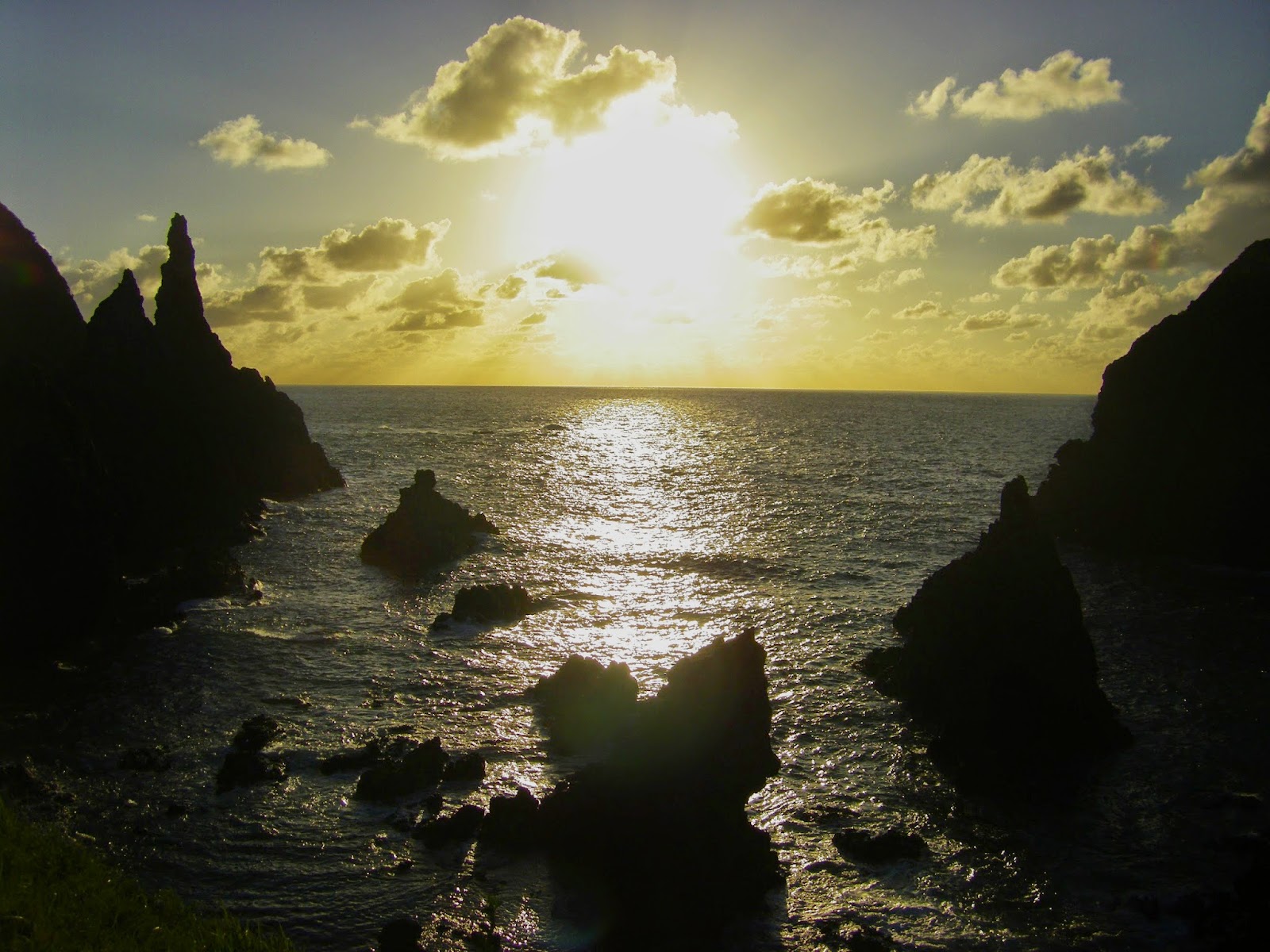 We then got back in the kayaks to watch the sun set while in the water.  Japanese love to rank things.  We are always seeing things like "one of the 5 most scenic pagodas" "one of the top 100 places to view fall leaves" "one of the top 10 gorges" and so forth.  It cracks me up, they never give the exact rank but they like to say that it is "in the top".  So in that spirit, this was "one of my top 3 sunsets". 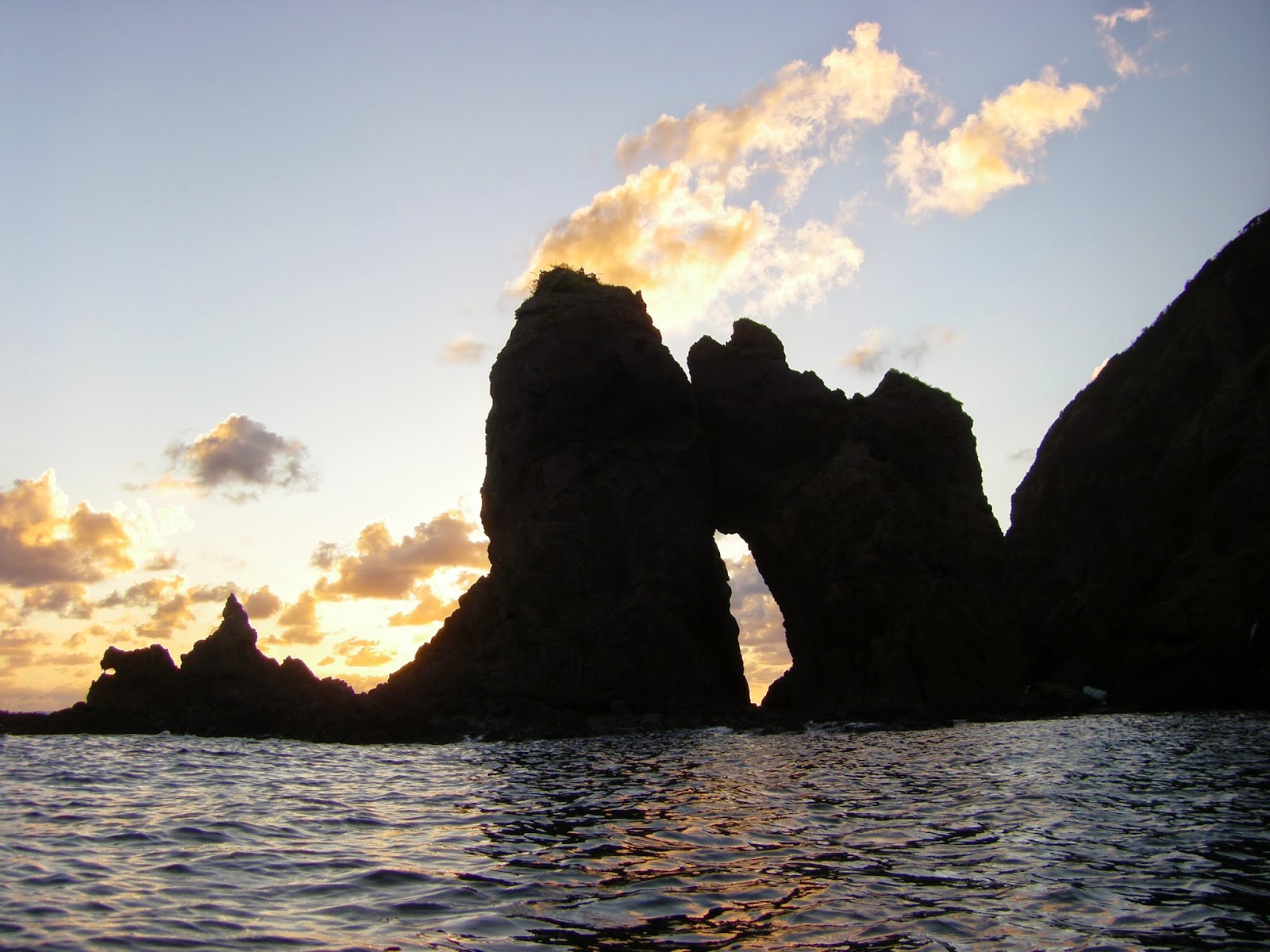 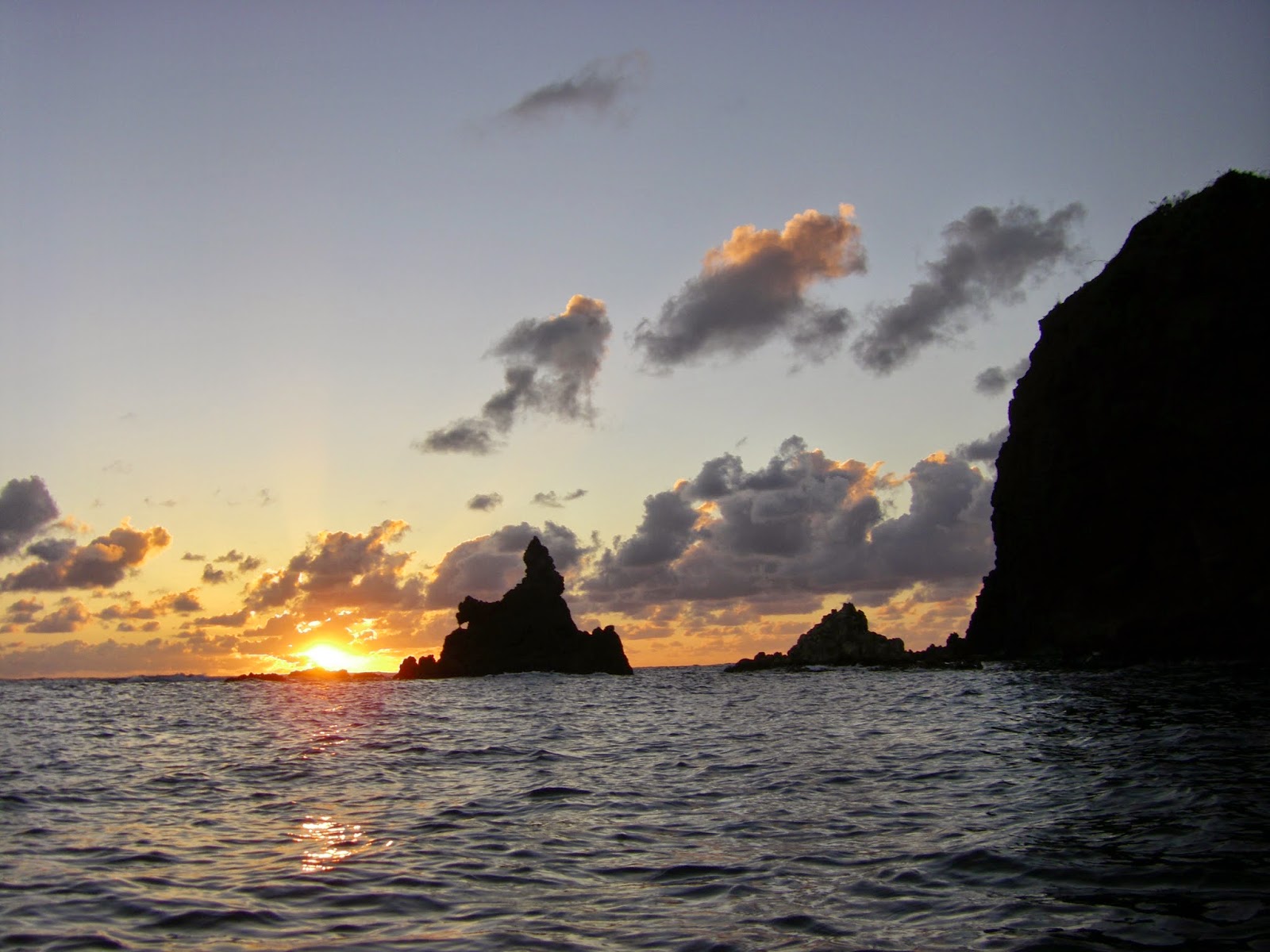 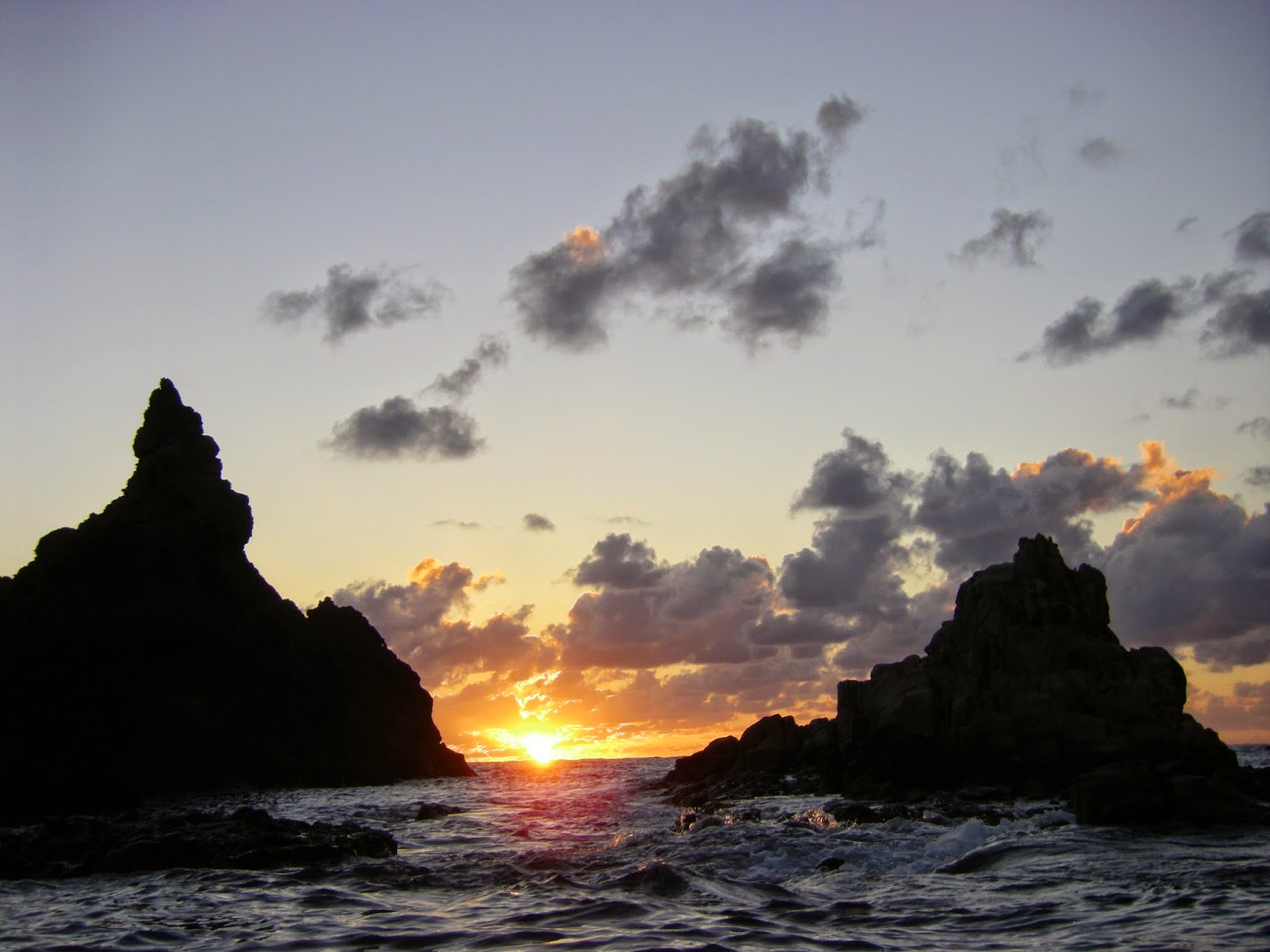 I have a really hard time picking photos on days like this.  There are way too many that I like for different reasons.  I apologize for this being a massive blog day.

After kayaking the guide offered to drop us at our hotel.  We asked to be dropped at some place for dinner instead and specifically requested someplace with sushi or sashimi.  We were dropped in front of what looked like some guys house.  After opening the door was a tiny restaurant with one traditional Japanese table (tatami floor and low table with a small cushion to sit on) and 3 bar stools.  We had both sushi and sashimi and it was the best we ever had.  Fantastic.

We then finally made it back to the hotel and only had one more challenge/adventure... public bathing.  Public bathing is big in Japan.  They like their hot springs and public baths.  The only hotel I could find with rooms available this weekend is Japanese style with tatami floors, futons and public baths (there was a super tiny bathroom with a sink, toilet and shower in a 3 x 5 room, the smallest bathtub I've ever seen) but we decided that part of learning about Japanese culture is getting naked with them.  A little more about Japanese style hotels really quick.  The hotel provided slippers at the entrance.  You leave your shoes at the front door and wear slippers everywhere in the hotel.  The futons are stored in the closet and are laid out at night, so during the day the room is very empty.

In this hotel they had separate men's and woman's baths (thank goodness).  There were 5 women on the ladies side.  The drill is you shower, get cleaner than you ever have in your life and rinse, before you get in the bath (so you don't contaminate the water).  There was a wall of showers with hand held sprayers.  You sit on a little stool and scrub yourself thoroughly and wash you hair.  It is all very public.  I'm not super prudish but it is really intimidating when you feel like you are being judged (particularly because I am a foreigner) on how well I bathe.  Not that I saw anyone looking, but you just feel...  yeah.  Not super comfortable.  The ladies left while I was in mid-scrub which made me feel much better.   I relaxed in the hot water for a little while before heading out.  The hotel provides nice cotton robes to go back to your room from the shower.  What I didn't realize was that I should have brought my towel too.  Sigh, fail.  Well, it was a learning experience and next bath I'll have a much better idea on how things work.  We then collapsed on our futons and slept really well.

Posted by skysworldadventures at 7:04 PM