If you ask 10 people in Japan (expat or Japanese doesn't matter) 9 out of the 10 will say their favorite place to visit is Kyoto.  Kyoto was the imperial capital of Japan for more than 1,000 years.  It is known for having many shrines and temples in addition to fantastic food and beautiful gardens.  It is pretty safe to say that Jeff and I were super excited about this trip.  Our most difficult decision was choosing what to see.  We had 5 days, but that is really only enough time to see a fraction of the sites.

We decided to take the Shinkansen (bullet train) which takes only 2 hours from Higashi-Hiroshima to Kyoto.  The trains are super clean, fast, spacious and all around awesome.  The things to see in Kyoto are fairly spread out so I found a hotel a short walk from the main train station and a subway station (I booked the hotel over 2 months ago.  Hotels fill up quick in Japan.  Walking through the train station to our hotel we passed an information center that said "no hotel vacancies in Kyoto").

Our first stop in Kyoto was the hotel, it was way too early to check in but they held our luggage for us and then we set out to explore.  Jeff and I spent the afternoon wandering all over Kyoto on foot.  Walking down streets that looked interesting without much of a plan.  We had a lovely time and got a good feel for the city. We found some unexpected nooks and crannies.  Jeff found a drum shop that made him really happy.  Here are some pictures from our wanderings.


We decided to walk through a shrine around sunset.

After much exploring we got hungry.  Jeff found a fantastic little tempura (lightly battered and fried) restaurant.  They had 3 set meals.  We opted for the smallest one which was still huge.  We sat at the counter while the chef prepared our meal.  They spoke some English which was really nice since they told us what to dip where (there were three dipping options).  The food was excellent.  Mostly tempura vegetables and seafood with rice, a salad, miso soup and sorbet for dessert.  There were a couple of things that were a little on the "I'm not sure I want to eat that" side of things including an entire small fish (head, fins, guts, bones - eat the whole thing) and the head of a shrimp (legs, shell and all) but we tried everything and most of it was excellent.  We left tired and stuffed and took the easy route and got a taxi back to the hotel.

I managed to get a non-smoking room* at the hotel which was a huge bonus but the room was tiny, I mean REALLY tiny.  The bed was somewhere between a twin and a full (two pillows when laid flat overlap in the middle) with the bed pushing up against the wall on one side and about 2 feet of space between the bed and the desk on the other.  Jeff and I are very small for Americans but it was still interesting if both of us were trying to do something in the room at the same time.  After a couple of days we gave up and one of us would pretty much just sit out of the way if the other guy was getting dressed - lol. 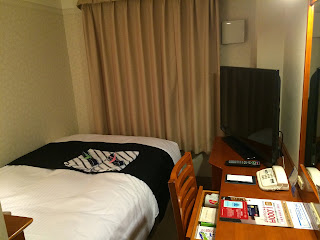 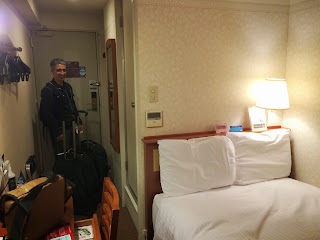 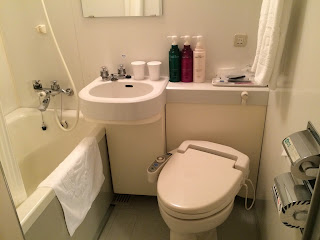 With that being said, it was a clean room and well maintained.  Our only really complaint was that it was hot.  Starting in September, they turn off the cooling in the hotel room.  You can run the heat or the fan.  No cooling and the fan puts out a little bit of heat.  We were on the 9th floor and it got pretty hot in our little room (especially since it was impossible to both be in bed without sharing a little body heat and Jeff is a furnace.  If we opened the window it was a little loud from the street noise.  Not ideal but we managed to sleep.

*Smoking in Japan:  Japan is a little like the US was back in the 80's.  You go to a restaurant and there is a smoking section and a non-smoking section but the restaurant is tiny and nothing actually separates the two sections.  Very few hotels have non-smoking rooms.  I really hate cigarette smoke but prior to this trip we only had one night in a hotel in Japan that was a non-smoking room.  The do a very good job airing out the rooms but you can still smell the smoke.  Fortunately, most public spaces are non-smoking like trains, train platforms, and shopping areas.  They sometimes have a smoking room for people to go to.

Posted by skysworldadventures at 5:24 PM