We decided to get up early and beat the Saturday morning tourist crowds. Japan is not really an early morning country so it's pretty easy.  Our hotel had a continental breakfast that was an interesting mix of western and Japanese foods.  There were breakfast pastries, eggs, fresh fruit, yogurt, curry, rice, soup, salad and noodles.

A quick walk to the train station, a change to the subway and we got to Daigo-ji Temple.  This is one that I had seen pictures of and really wanted to see.  it was an added bonus that the fall leaves were starting to turn on the Japanese maples (my favorite type of tree).  I totally love fall leaves.  I apologize in advance for the abundance of fall leaf pictures on this trip.


This was a great stop.  It's a little off the beaten path and with our earlier arrival it was very quiet and not many people here.  This was one of my favorite spots in Kyoto.

Next we went to Byodo-in Temple.  A quick subway ride and a train and we were there.  This is a very large temple and was much more popular.  I tried to keep the droves of people out of the pictures but it was a little bit of a challenge. 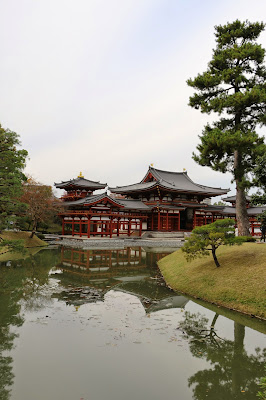 We then went back to Kyoto and took a short break in the hotel before heading out to see the To-ji pagoda lit up.  I saw some pictures of it at night and it was really pretty.  When we got to the temple we were told that the grounds closed at 5:30.  No problem, sunset is around 5:00.  As we are waiting for the lights to come on, we were reading a pamphlet we were given with information about the pagoda.  It is the tallest pagoda in Japan and it has burnt down and been rebuilt 4 times!!!  I couldn't help but think of this from Monty Python and the Holy Grail "When I first came here, this was all swamp. Everyone said I was daft to build a castle on a swamp, but I built in all the same, just to show them. It sank into the swamp. So I built a second one. That sank into the swamp. So I built a third. That burned down, fell over, then sank into the swamp. But the fourth one stayed up. And that's what you're going to get, Lad, the strongest castle in all of England."

The grounds were really quite pretty and we kept waiting for the lights to get turned on but sadly we were asked to leave before they were turned on.  At 5:32 the lights turned on and I could see the very top of the pagoda lit up but the rest was blocked by the fence and trees.  Bleh!  I was a little irritated since I specifically wanted to see it with the lights on.  Why kick people out and then turn on the lights?  Oh well.  Here are the pictures I took while waiting.

After getting kicked out of the temple, we went walking to find dinner.  I was hoping for something light after the previous nights fried gut bomb.  We found a place that had large salads and that was good for me.  Jeff had some steak and the normal Japanese fixings.  We were pretty tired by the time we got back to the hotel and slept well.

Posted by skysworldadventures at 6:00 AM